"the hopes and expectations of the people of south Sudan are so pinned on that date that it would be dangerous to postpone it because the level of frustration and disappointment would be so high for anybody to manage."

That is Pagan Amum, the Minister of Peace, on why the referendum can’t be delayed. For the past couple of weeks, there has been a growing fear amongst the government and population of South Sudan over the potential delay of the referendum. What began as a statement, that was apparently misattributed to Pagan Amum, on the possibility of delays have begun to become more of a reality as disagreements over the selection of a secretary general for the referendum commission seeks to stall the entire process.

Tarek Osman Al-Tahir, a member of the referendum commission at the headquarters in Khartoum suggests:

“We have only two choices left: skip some of the procedures, which would be unacceptable because it could affect the endorsement of the referendum result or resort to the other choice of a limited delay to the referendum timetable to complete these procedures.” source

The first choice would probably work out favourably for Khartoum as a lack of registered voters will result in insufficient votes for secession. The second choice would be, as Amum puts it, “dangerous...because the level of frustration and disappointment would be so high for anybody to manage” and we will probably start to see an increase in violence from the civilian population if not from the military itself.

On the other hand, Pagan Amum also suggests 2 possibilities:

"One of them could be that the parliament of southern Sudan takes over the process of organising the referendum fully without the north if the obstruction is coming from the north,"

"Another one would be carrying out a vote in parliament which is not necessarily a universal declaration of independence," Source

These two possibilities have been the hot topic under the mango tree recently. Well, maybe just the latter. Khartoum would never stand for the parliament of South Sudan to simply take over the process of organising the referendum, as the CPA states that the process shall be conducted by both parties. So if they were going to go against the CPA, then there really isn’t much point in even completing the referendum process, which leads us to the second option...

Amum says that carrying out a vote in parliament is not necessarily a universal declaration of independence. Now, this can be interpreted in 2 ways. Firstly, it could mean that if the commission simply skipped a few processes by doing away with voter registration and doing away with the voters all together, parliament could vote as representatives of the population on the 9th of January. This seems somewhat feasible, but as the CPA has established deadlines for these processes, it may be rather difficult to argue against the necessity of including public voters in the referendum.

The second interpretation is a bit trickier because he says that a vote in parliament would not be interpreted as a unilateral (he says universal, but I’m sure he meant unilateral) declaration of independence. So we have to assume that either he really does not know what he is talking about, or he has some diabolical legal magic trick up his sleeve that will dazzle the world into not realising that South Sudan has in fact just unilaterally declared independence.

The thing is, the CPA and the subsequent Referendum Act doesn’t really provide sufficient information to deal with contingencies such as this. It gave a lot of power to the Referendum Commission to deal with the various issues that were bound to come up, such as the delaying of the referendum, but it seems that it didn’t really plan on the Commission having such difficulties in establishing itself. All that is left now is for renegotiations to take place. But this would only lead to a delay in the referendum, an idea that Pagan Amum has hinted to being very unlikely. Therefore, all it takes is for GoSS to come up with a good reason to decide that Khartoum is sabotaging the process and to declare the CPA null and void. This will subsequently open the doors to a unilateral declaration of independence, a decision that leaves the fate of South Sudan’s independence to the international community. But I’m sure they will work out, 22 years of war is still a 22 year relationship right?......

Email ThisBlogThis!Share to TwitterShare to FacebookShare to Pinterest
Posted by Boredinpostconflict at 7:55 AM 3 comments:

Rationality and determinism at the Frontal Cortex

Over at The Frontal Cortex, there is a brilliant analysis of an old and a new study that reinvents the idea and purpose of rationality and reasoning.

"That voice in your head spewing out eloquent reasons to do this or do that doesn’t actually know what’s going on, and it’s not particularly adept at getting you nearer to reality. Instead, it only cares about finding reasons that sound good, even if the reasons are actually irrelevant or false. (Put another way, we’re not being rational – we’re rationalizing.)"

Being on a thought provoking roll, he also has an excellent post on the debate between free will and scientific determinism that is definitely worth a read. Lets hope he keeps it up.
Email ThisBlogThis!Share to TwitterShare to FacebookShare to Pinterest
Posted by Boredinpostconflict at 3:45 AM No comments:

After having my fair share of attacks (and here) on Enough and John Prendergrast, I felt that I shouldn't make any comments or (even) acknowledgements towards the ongoing debate surrounding the conflict minerals legislation. So I'm just going to link to Wronging Rights succinct summary and show some love to their excellent argument:

"Campaigns centered around telling the public that their yuppie-consumer-goods are full of rape and murder are, fundamentally, aboutdisengagement, not engagement. This kind of advocacy tells consumers that the problem is their connection to the conflict via the minerals in their phones and iPods, and that the solution is to break that connection.

That's not a recipe for ongoing engagement, it's an invitation to withdraw further from an already-remote problem."

Nice......
Also, respect to Texasinafrica.
Email ThisBlogThis!Share to TwitterShare to FacebookShare to Pinterest
Posted by Boredinpostconflict at 5:56 AM 2 comments:

GoSS recovers 6 million Pounds paid to ghost employees as they introduce the new electronic payroll system. Now, all government employees will be expected to open a bank account, which will be used for the payment of their wages rather than to simply hand them the cash. The Citizen printed newspaper, reported that whilst going through the various 'ghost employees', they found a 13 year old boy being paid a Captain's wages.
Email ThisBlogThis!Share to TwitterShare to FacebookShare to Pinterest
Posted by Boredinpostconflict at 2:38 AM No comments:

A letter to GoSS

Dear Government of South Sudan,
Allow me to start off by saying that I am a big fan. Working alongside your many, many.....many commissions,ministries and bureaus for peace and security has brought great pleasure to my life. However, I am writing to you today to discuss a more serious matter. I would like to make a request for you to cease all lighting upgrades and modifications to your many, many....many Landcruisers. Firstly, as pimping as having neon lights on the skirting of your cars might be, it may come across as unprofessional and decadent to your citizens. More importantly though, please resist from adding those blindingly bright white-light head lights to your cars. Just because it helps you see other people and cars better, does not mean that they can see you. I would suggest following Malakal's example and putting in some street lights. Finally, I realise that most of your employees are always in a hurry, as the referendum is approaching so closely and theres still so much to be done. I also realise that when flashing the car in front of you with your flood lights, as annoying as it is, is a universal signal for "get out of the way". However, attaching strobe lights to your head lights is just F***ING RIDICULOUS!! Therefore, I implore you, to remove said strobe lights from all government vehicles and prevent the disastrous and dramatic increase in government induced road accidents.
Thank you and good luck with the coming referendum.
Email ThisBlogThis!Share to TwitterShare to FacebookShare to Pinterest
Posted by Boredinpostconflict at 3:28 AM No comments: 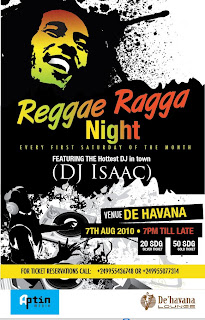 Juba's very first monthly event. Imported DJ from Uganda playing those awsome tracks that your neighbour likes to play to prevent you from getting any sleep on week nights. Seriously though, if an event's poster has my face on it, you know its going to be good (inside joke - sorry).
Anyways, you'll find me in the VIP section looking pimp.....please don't make eye contact with me......I'm better than you.
Email ThisBlogThis!Share to TwitterShare to FacebookShare to Pinterest
Posted by Boredinpostconflict at 3:04 AM 2 comments:

The future of Homosexuals in South Sudan

"It is not in our character [...] it is not there and if anybody wants to import it to Sudan [...] it will always be condemned by everybody."
That was Salva Kiir on a radio interview with 'Radio Netherlands Worldwide'. The page doesn't provide the full transcript of the interview, which only leaves me to wonder as to how the interview reached the topic of homosexuality. Maybe they were discussing their favourite youtube video and 'Eat da poo poo' was mentioned.
So much for a country being born out of the promise of an end to the persecution and discrimination of minorities.
Good thing Roving Bandit got out before they started lynching him.
P.s. Sorry, Ive just come back from the field and am very disorientated. I will try to post some slightly more intelligent and mature (not that type of mature) content soon
Email ThisBlogThis!Share to TwitterShare to FacebookShare to Pinterest
Posted by Boredinpostconflict at 7:56 AM No comments: