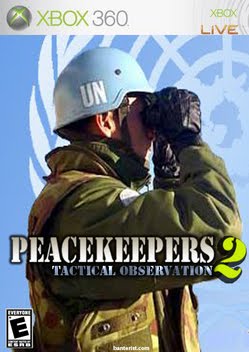 My nomination for the next Nobel Peace Prize has definitely got to be those useless fucking Peacekeepers in the United Nations Mission in Sudan (UNMIS). Reason being that even Gandhi wasn't this much of a pacifist.

Now if you didn't know, there has been an eruption of violence throughout the border regions of Abyei and South Kordofan as the Northern SAF have moved into major towns with ground forces accompanied by tanks and heavy artillery. Reports are coming in likening the situation to ethnic cleansing of the non-Arab population of two regions as well as anyone believed to be supporters of the South. The UN Peacekeepers tasked with errr, keeping the peace and protecting civilians have done a phenomenal job of staying in their compound and cowering like a bunch of……(I was going to come up with some clever metaphor, but anger blinds me. So...) fucking pussies.

In Abyei, the Zambian peacekeepers, behaving like teenage stoners, "locked themselves up for a couple of days...They were then instructed to come out of their barracks and start patrolling, but they had already lost a crucial 48 hours". And the 150,000 residents had already run away to the South. Similarly, the Egyptians in South Kordofan “fear for their lives. Official position of UNMIS is to stay calm and threat will pass but personal advice shared is to get out and sooner the better.”

Yes, absolutely brilliant strategy. Just chill…... hopefully SAF will soon be done with wiping out the entire native population of the two regions and then they’ll go back to Darfur or just go for a nap. Otherwise, we can throw some children at them while we make a quick get away in our helicopters.

Here are some highlights of peacekeeping failure from various reports coming in the from the 2 regions:

· The 10,000 civilians who have sought security at the
UNMIS base in Kadugli are desperately short of water and facing
growing security risks. Many have already left Kadugli, and the town
of Dilling to the north is reportedly deserted.

· UNMIS in Kauda totally lost credibility with locals who also
feel they collaborating with north (partly due to policy to only
evacuate via north). Locals mistrust extends to not giving UNMIS
credible information. This adds to unreliability of UN information.
UNMIS peacekeepers in Kauda accused of staying in compound, late with
patrols, have poor communication facilities (computers infected) and
often rely on news of unrest in their vicinity to come from Kadugli
section leader.

· Now heard from 2 different sources that local black people
perceived to support SPLM/A being pulled out of UNMIS compound in
Kadugli and executed in presence of peacekeepers. No protection from
them.

· The UN Peace Keepers are standing idly by and
civilians have been killed right in front of their eyes and there
hasn't been any intervention on their part. They are there to protect
civilians but they give no protection to the people. And they are not
Zambians who were blamed also for not protecting the people. They are
Egyptians!!

· A reliable source reports that Khartoum’s fearsome
Military Intelligence forced its way into UNMIS headquarters in
Kadugli and took many suspected SPLM sympathizers. This source also
reports that a "disabled man in a wheelchair was found killed outside
the UNMIS compound after he sought protection [there]." This has had
an understandably chilling effect on those looking to UNMIS for
protection, and many who had originally gathered at the UNMIS base are
melting away. A number of those caught and labeled "SPLM
sympathizers" have almost certainly been executed.

· There are also reports of UNMIS allowing SAF soldiers to stop the UNMIS buses filled with people evacuating the area and searching through their belongings to help identify possible SPLM supporters.

So yeah, a total fuck up of a fucked up system. At least they were aware of their errors:

“The UN has admitted peacekeepers were wrong to stay in barracks during
recent fighting between northern and southern Sudan that left scores
of people dead and caused tens of thousands to flee.”

And I admit that I was wrong for raping your mother’s face. Oh no wait, that was also UNMIS:

“Dalman also directed criticism at UNMIS and accused the Egyptian contingency in the area of raping six women. He said the incident took place after civilians fleeing the fighting took shelter at the headquarters of the peacekeeping force.

They do have a pretty good excuse for their failure to protect though:

“The UN Missions in Sudan (Unmis) troops were themselves under fire at
their base… In terms of the physical protection of
civilians, it must be recognised that most civilians left the area
before the peak of the crisis and that Unmis troops and civilians were
themselves in imminent danger as the Unmis compound itself was hit.”

Oh no, oh poor babies. Your trained SOLDIERS were shot at during a WAR?! Oh how awful. Don’t these nasty people know that you were just there to earn your home country a bit of extra cash? Not to actually engage in any conflict. Next thing you know people are going to expect the UN DDR to actually do DDR stuff?

Although UNMIS must be pretty pissed off as they probably expected it all to be a Rwanda-like situation,where only the local population were targeted and the peacekeepers got to just stand there and watch.

Maybe Im being too harsh. UNMIS has provided some good to Sudan. In Juba, they have provided lovely fields for us expats to play our stupid expat games on. They have also taken lead on the reporting of the serious psychological trauma of Equus africanus asinus.

Now all these reports have not been properly verified, so maybe we should see what our nerds in space have to say about all this:

“The Satellite Sentinel Project said a group of former U.S. civilian
and military officials had affirmed the group’s visual evidence that
the Sudanese government had “allegedly committed war crimes during its
occupation of the disputed region of Abyei.””

Oh shut the fuck up you wankers…..

Email ThisBlogThis!Share to TwitterShare to FacebookShare to Pinterest
Posted by Boredinpostconflict at 7:11 AM