On Tuesday the Vice President, Riek Machar, called for a joint meeting involving national ministers and leadership of the bicameral Juba parliament as well as representatives of the political parties, national unions, business community, local NGOs and civil society organizations in the country.The meeting called for the formation of a wider national mobilization body to coordinate efforts geared towards mobilizing human and material resources to support the national army in the face of the "Khartoum’s aggression.".....This will include recruitment into the army youth volunteers and ex-combatants.

So much for all that effort put into DDR......well, at least UNDDR now has a solid excuse for not having done anything.
Also, how awkward is it going to be to have the soldiers go back out to the villages to return the weapons they took from civilians during the various disarmament campaigns.


Still, I can't see any possibility of this decision coming back to haunt them in the future.........

Email ThisBlogThis!Share to TwitterShare to FacebookShare to Pinterest
Posted by Boredinpostconflict at 6:59 AM 3 comments:

Reports are coming in of Sudanese Airforce dropping bombs on the UNMISS camp in Bentiu...


It appears that the SPLA have intentionally not target the planes with their anti-air weapons following a secret deal that was made between the North and the South. Apparently, both sides have grown so sick and tired of the sheer laziness and incompetence of UNMISS that they both turned their sights on to the peacekeepers and UN general staff.


"Gideon, the minister, Gatpan said that two bombs had fallen in the UN camp, destroying a generator and a radio."

In an interview with the minister, he said,


"We told the northerners to target their main sources of entertainment, namely, their electricity and communications.......we are hoping that once they no longer have anything fun to do in their fancy camps, they might get off their ass and do some peacekeeping, build some peace or at least just get out for some fresh air."

An interview with the Northern military spokesman confirmed this,


"Yeah well.....we're all out here fighting a war, getting ourselves blow up and shit, the least those bastards could do is have enough consideration to just pretend like they give a fuck. Instead, they just sit there acting all high and mighty like our beef is not good enough for them. It's like they're all waiting to get transfered to a sexier conflict in somewhere like Syria. Anyways, we decided to bomb their entertainment system in hopes that they will finally leave their compound to watch us blow the shit out of each other......let's hope it works."

Email ThisBlogThis!Share to TwitterShare to FacebookShare to Pinterest
Posted by Boredinpostconflict at 1:46 PM No comments:

Roving Bandit poses the question of the efficacy of UNMISS and goes further to question the viability of aid expenditure on peacebuilding and governance in general when compared to the "safer bet" of investing in health and education.

Lets first address the simpler issue regarding UNMISS......
What have they achieved?......so little that their ineptitude has caused a vacuum that threatens to engulf our planet ....

I was tempted to just leave it at that........but I guess there are many more laughable points to be gained from a deeper investigation.

The best place to start would be their website. While there are all sorts of updates, articles and reports on all sorts of activities that you would think UNMISS is involved in, a closer inspection leads to the realisation that UNMISS is nothing more than an event planning and taxi service. For example, following the violent conflicts in Jonglei earlier this year, the South Sudanese Presidential Committee for Peace organised a peace planning workshop (no surprises there), where they came up with a bunch of points and ideas that had already been thought of a million times over during the million other peace planning workshop that has taken place since the concept of peacebuilding came to South Sudan.

In reply to a question regarding how UNMISS hopes to contribute to these wonderfully 'novel' ideas, some important UN guy replied;


"We will provide logistical support, from transporting the committee that has been formed to conduct the peace process at the grass-roots level to organizing workshops and meetings within communities.

We will participate in substantive discussions and offer ideas for working group meetings. We have also been providing logistical support for sensitization of the parallel civilian disarmament process. And we are prepared to assist with destruction of collected weapons, if that is the government’s wish, or help transport them and store them in a safe and secure place"

Translation: We will let you guys play with our fancy helicopters (which are in a ludicrous abundance and serve very little purpose aside from making the few who get to use it feel like a badass). We will also throw you some wicked-fun conferences with delicious snacks and crappy t-shirts. And finally, we will take out your trash (guns) or burn them......you know.....whatever you need to make us feel like we're doing something.

I got a bit carried away there..... anyways, the site is filled with what their targets and objectives are, but contain absolutely no information regarding what they have achieved (this usually suggests nothing).

And now, regarding Roving Bandit's point on peacebuilding and governance projects in general.....

Someone in his comments section had already addressed the problem of assuming a returns in education so allow me to try and respond to the point on health with an anecdotal point.

I once worked on a project in South Sudan where we were setting up water points as well as latrines (for the school) in a particular village. However, about 2 weeks after the project was complete there were some conflict between different ethnic groups which subsequently led to the entire village being abandoned. Ok, fair enough that this was WASH and not necessarily health, but I think the point is clear. While conflict continues to constantly displace people, it is rather difficult to make a good targeted investment in any sector. Also, lets not forget the number of hospitals that get burned down as a result of conflicts (an example of a couple here).

But the main argument is really that peacebuilding does not necessarily have to be a big gamble. As long as a shred of thought is put into the projects and that ideas are based on actual evidence as opposed to simply being the musings of a bunch of arbitrarily selected individuals at a 'party' organised by UNMISS (more on this rant here)

Finally.....to you Roving Bandit; you calculator-wielding, STATA-code-eyed, rational-model-worshipping, oversimplifying, desk jockey!!.........Stop trying to quantify and measure peace. Has the Wire not taught you anything about the downfall of playing a numbers game when it comes to peace?

"A memo written by a public affairs officer at the US embassy in Uganda documents Invisible Children’s collaboration with Ugandan intelligence services. It notes that the US-based NGO tipped the Ugandan government on the whereabouts of Patrick Komakech, a former child soldier for the Lord’s Resistance Army (LRA), who was wanted by security officials for extorting money from the government officials, NGO’s and local tribal leaders. Ugandan security organizations jumped the tip and immediately arrested Komakech.As a result of the tip, the Ugandan military claimed it obtained the names of other suspects from Komakech. The military then conducted a sweep and arrested a number of people, many of whom declared their innocence, the Ugandan media reported. Human rights groups say torture of arrested suspects by Ugandan security forces is routine. "

"Invisible Children also actively supported Operation Lightning Thunder (OLT), a joint attack by Uganda, the Democratic Republic of Congo and the then-autonomous South Sudan against the LRA. The operation, which was also received US intelligence and logistical backing, killed more civilians than LRA militants. In a confidential memo dating back to 2009, US ambassador to Uganda Steven Browning noted that the US-based NGO planned pro-OLT events under the theme “Kony Must Be Stopped. Rescue Our Children”. "

Hahahha, maybe IC's LRA Crisis Tracker was what they meant by US logistical support.

But in all seriousness, I think that this is an exagerattion of IC's capabilities in an attempt to write a attention grabbing headline. I mean, the fact that King of Conspiracies, Alex Jones is talking about it automatically kills its credibility.

I did a search to find the documents the article was referring to and I came up with these two:

The first document does confirm the point about IC tipping off the Ugandan Intelligence service regarding the whereabout of Komakech is true......The funny thing that was not mentioned was that Komakech was actually staying in the IC compound in Gulu....so not only is IC a spy organisation, they also harbour criminals.

The second document mentions IC's plan of organising a pro-Operation Thunder Lightning campaign and releasing a video called "Kony Must Be Stopped, Rescue Our Children". The way the document refers to the campaign does create the feeling that IC was acting as a tool of propaganda. However, after having watched many spy movies and TV show, I can expertly suggest that IC was being used as a tool at the absolute most. I can't find the video..... although I'm sure seeing the video would determine the degree of IC's intention.

IC are mentioned on a few other documents, but nothing exciting is really mentioned there.

So while it would be sexy and exciting to think that these guys are actually CIA spies, I'm pretty sure its safe to conclude that they are just a bunch of clueless wankers (literally, in the case of Jason Russel HAH!). 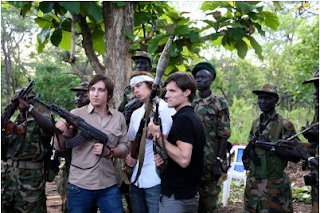 
[insert joke about how the CIA controls social media that make reference to this: The Onion]

Email ThisBlogThis!Share to TwitterShare to FacebookShare to Pinterest
Posted by Boredinpostconflict at 5:56 AM 2 comments:

I stumbled across this project while doing some research and was utterly amazed by it. I am always pleasantly surprised by how much faster a country's entertainment industry is able to establish itself when compared to those that would seem to be of greater importance. The actors seem very dedicated and the choice of play is unexpected, but brilliant nonetheless.

“South Sudan has wept enough, it is time to tell stories, sing songs, dance, recite poetry and shed tears of joy to celebrate a new dawn where artists, writers, poets, playwrights, dancers, commentators, comedians, take centre stage to give our people food for thought, laughter, hope and even provoke. The important role of these creative people cannot be underestimated in peace building and to liberate the South Sudanese mind from negative thinking or feelings of inferiority.” Joseph Abuk, Director, SSTC

If you like what you see go here to help contribute to the success of the project.......also, isn't crowdfunding such an amazing idea?

This also presents a good opportunity for me to share a video a friend sent me recently of yet another South Sudan movie. Its called Jamila, and has a typically drama feel to it reminiscent of Nollywood films, minus the witches and sorcerers.

Email ThisBlogThis!Share to TwitterShare to FacebookShare to Pinterest
Posted by Boredinpostconflict at 4:58 AM No comments: