Nah, just kidding. This is actually just another post about why I hate Prendergast.

In introducing our favourite humanitarian disaster, Stephen Colbert said this,

"....and your group helped push the referendum that led to the creation of South Sudan"

In which Prendergrast replied with a..... 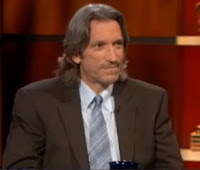 Now before I go ahead and criticise Prendergast for not correcting Colbert for such a claim, I thought it would only be fair that I first spoke to those involved in the referendum to see whether this point may actually be true.
So I hoped on my magic donkey and went to see my bro Bashir to get his views.

"Prendergast?! Dude with feminine long hair? He is somebody? I think that hippy was George Clooney's drug dealer or personal assistant. But no, he do nothing to push referendum.....it was all Clooney. He told me I get to be in his next movie with Matt Damon.........Kim Jong Il is going to be so jealous"

Anyone else out there tries to take credit away from the people who truly struggled to reach this independence will know my wrath. I will write many blog posts using the most juvenile of insults to bring shame upon you and your genetic existence.
Organisations that merely raise awareness for a bunch of self-righteous American college students who then go and host parties to raise awareness amongst themselves in a self-gratifying circle jerk gets no credit.

Clooney on the other hand gets mad props. Respect brother.

And yes, I am being petty. But you see, Prendergast to me is like what airplane food is to a failing comedian. When I have no material to write about, I can always rely on Prendergast for inspiration just as a comedian can turn to airplane food in times of desperation.
So despite my inherent hatred towards him, he is pretty much the foundation of my blogging career.
Email ThisBlogThis!Share to TwitterShare to FacebookShare to Pinterest
Posted by Boredinpostconflict at 2:23 AM