I received a document today of IKV Pax Christi's latest publication on Sudan entitled:
CPA Alert: The State of Sudan's Comprehensive Peace Agreement - Alert No. 2!!!! (you have to say it with a dramatic-action-movie-trailer voice).
I didn't manage to get past the cover without being shocked and disgusted by the recklessness of this publication. Have a look: 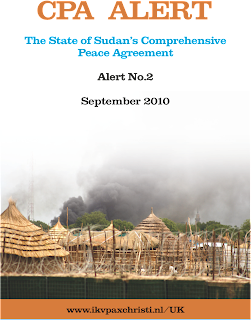 Notice anything wrong? No? Well allow me to explain......
Viewing an image of plumes of smoke rising up from tukuls (huts) in a post-conflict country tends to invoke thoughts of violence and conflict as though marauding evil-doers are running around setting fire to entire communities, probably raping and pillaging in the process. This is especially true when the word ALERT is written (massively) twice just above the image. It acts to instill the idea that this carnage will happen if the issues surrounding the CPA (and what ever Pax Christi says about it) are not addressed.......like, RIGHT NOW!
However, this photo is actually just of a demolition project that took place in Juba a year or so ago. Talk about terrorism.... it is truly a sad day to see a peacebuilding NGO try to persuade their readers by adopting scare tactics and only using pathos as their mode of argument. I say ONLY using pathos because the paper is....well, pretty shit. Mind you, I have only skimmed it, but it seems like a repetition of many other papers that talk about the same thing and speculate only of horror scenarios (good breakdown of the referendum law though). The writing just feels lazy, and the recommendations are just unimaginative and consistently just state the obvious.
But, Im probably just being extra dick-ish about it because of their (ab)use of that photo and am therefore trapped in a cognitive bias.
Nonetheless, John Ashworth.......I thought you were cool man...

Photo credit: Petterik Wiggers (wanker.....well, only if you were the one that decided to be a whore)


NB: I am pretty damn convinced and have confirmed with colleagues that this photo is in fact a Juba demolition project and not actually a conflict. Otherwise, well, I'll shamefully delete this post and go into hiding.

Edit: I got caught up in the moment and may have been excessively critical yesterday. That photo and all this constant fear mongering by so many of these publications is starting to get to me. Have some faith you miserable bastards

Email ThisBlogThis!Share to TwitterShare to FacebookShare to Pinterest
Posted by Boredinpostconflict at 6:57 AM